July 28th is Independence Day in Peru – and the day we presented the community copies of La Historia de Hualcayán: Contada Por Sus Pobladores the volume written by Elizabeth Cruzado Carranza based on oral histories collected by Hualcayán high school students in late 2014. I have blogged before about the project origins. In preparation for the event, Elizabeth and I thoroughly cleaned the courtyard area of the archaeology research complex and set out a long row of tables and chairs. The night before we peeled 72 kilos of potatoes and Sheyla Nuñuvero and her assistants prepared 15 chickens, salad and quite a few gallons of chicha morado. 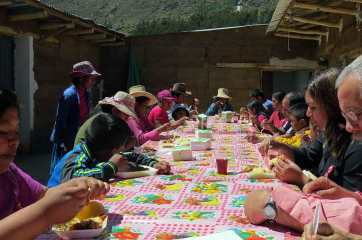 The event was a success. Eli and I were particularly happy that Leodan Abanto Alejo Valerio, who was responsible for launching the project, was able to attend and preside over the celebration. Consistent with being an outstanding educator, Leodan spoke eloquently and passionately about why such projects are important. He particularly focused on the educational role for the student oral historians in developing a sense of identity and pride in their community in both the Spanish and Quechua languages. 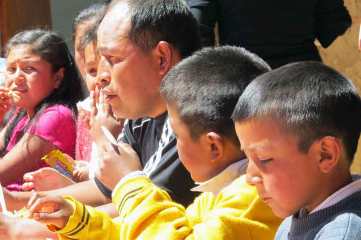 I spoke about the co-creative process. I noted that although Elizabeth and I had performed the technical publishing tasks and secured donations to fund the project, the essence of the volume was locally produced. That is, without the history verbally passed down over the years from community members, and passing that along to the student interviewers, the book would not have been possible. I also noted the uniqueness of the project – there is no other book of which we were aware in the Ancash region that tells a community’s history “contada por sus poladores.” The Hualcayán project is already viewed as model in one U.S. and two other Peruvian communities.

Elizabeth discussed her experience writing the book and presented a copy to every family in attendance. She noted that most of the copies would be placed in the school library consistent with Leodan’s expressed need for a classroom educational resource for students on their community history. 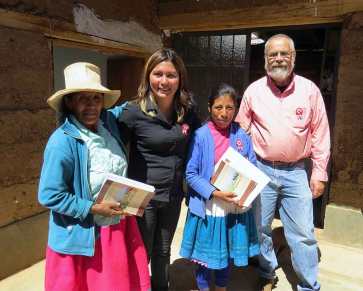 Several community residents spoke and expressed their thanks to the Hualcayán students who created the project and to Leodan for the original concept. Elizabeth and Rebecca Bria’s (Co-Directors of PIARA) friendship and long-term commitment to the community was also recognized by all of the residents who spoke. For example, even though pressed for time as she gathers data for her M.S. Thesis on a set of Hualcayán excavations, Elizabeth welcomes community children into the research complex every afternoon from 3:00 – 5:00 PM to watch videos on a laptop, draw, or other activities. She has spent many days, weeks and months over the past several years working in Hualcayán on archaeological and community based projects.

Here are some of my takeaways from the oral history book experience:

The above lead me to my “go to” snippets for what I mean by co-creation and applied archaeology:

Learn what aid the community needs: fit the museum to those needs. John Cotton Dana, The New Museum, 1917

. . . the act of engagement with others who are trying to make decisions related to particular heritage resources. Erve Chambers 2004:194

Working together or diversifying audiences is not enough. What is needed are reciprocal, co-created relationships that connect the assets and purposes of organizations. Elizabeth Hirzy 2002

To give voice and be responsive to the needs and interests of local community members; to provide a place for community engagement and dialogue; and to help participants develop skills that will support their own individual and community goals. – Nina Simon 2010:187

To this end, our field season this year in Peru is going quite well. 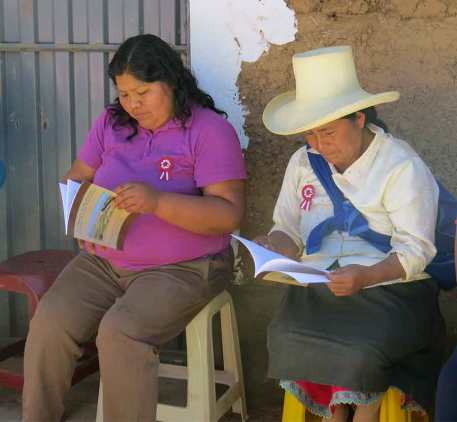 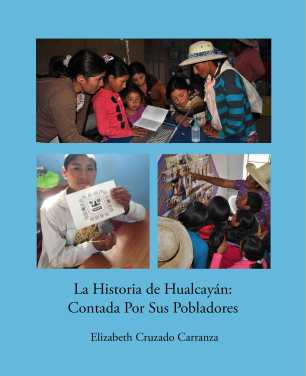 We are almost there!  On July 28, Independence Day in Peru, we will deliver the first copies of the La Historia de Hualcayán: Contada Por Sus Pobladores (The History of Hualcayán: In the Words of Its Residents) to the people of Hualcayán.  I am particularly excited because from inception to final production, this book stands as the proverbial poster child for co-creative projects.  Although I blogged about this project before and the sponsoring organization PIARA, here is the bullet point summary:

We aim for this model to be replicated in other small villages throughout the region.  In fact, the school teachers who initially expressed the need for the local history have asked that we follow them on their teaching assignments to the other 30 or so small villages in the Huaylas Province to assist in similar oral history projects.

If you agree with me that the oral history project is an exciting and innovative means to inform and educate rural communities about their rich cultural heritage, I ask that you consider making a donation to PIARA to help fund this stage of the project.  We are optimistic about future funding, and have received some grant support already, but are in need of immediate contributions to complete this first stage.  Your consideration of making a donation to PIARA in any amount, large or small, is greatly appreciated. 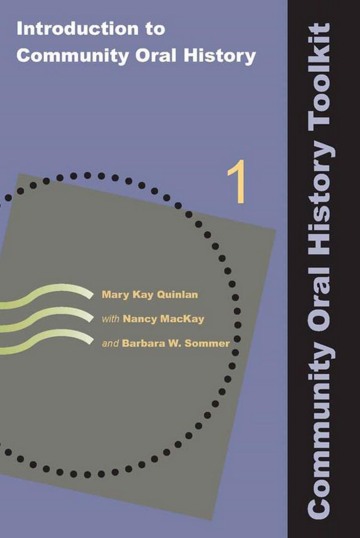 When it comes to methods and processes, I am a fan of lots of short focused articles that present multiple perspectives.  For example, the Small Museum Toolkit consists of six short topical volumes on a range of museum issues from leadership to exhibits and all points between.  The Toolkit is particularly helpful because each volume chapter introduces the essence to a specific area but also points to resources for further research and study.  I find such Toolkits, like the Technical Leaflets in each issue of History News from the American Association of State and Local History, essential authoritative introductions on a range of practices, particularly for those of us in smaller institutions who wear many hats.

With this perspective in mind, I anxiously awaited the release of the Community Oral History Toolkit written by Nancy MacKay, Mary Kay Quinlan, and Barbara W. Sommer, published this spring by Left Coast Press.  The Toolkit is composed of five 150-page volumes.

Oral history projects are certainly nothing new but they continue to move more fully to center stage in community cultural heritage projects.  For example, consider the Power of Story theme of the recent American Alliance of Museums Annual Meeting in Baltimore.  A fundamental knowledge of oral history process is essential particularly for the cultural heritage professional in a small museum environment. 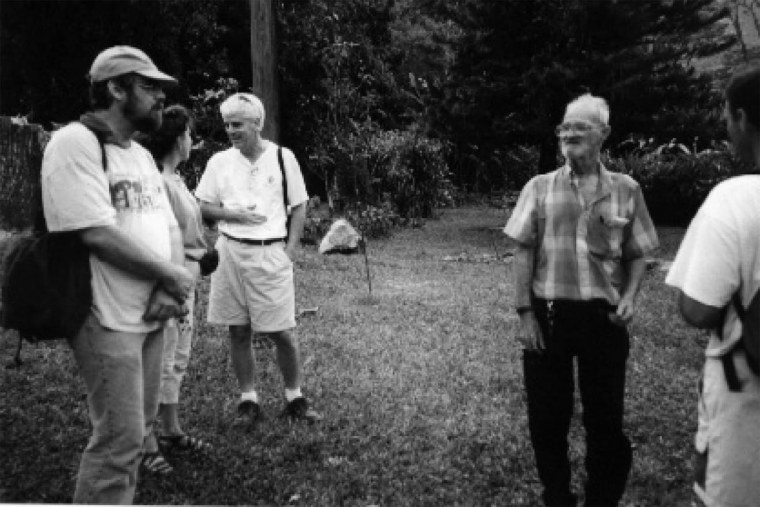 1998 photo from coffee finca in Los Naranjos Honduras of Billy Pilgrim (?) (right) who worked with James Ford at Poverty Point in 1950s.

From my own archaeological experience, I can recall many occasions when collecting oral history’s would have been helpful.  For example, during my tenure in the 1990s as the Station Archaeologist at the Poverty Point site in Northeast Louisiana, I came into contact with at least three individuals who worked on field crews directed by James Ford in the early 1950s during the first excavations at this premier prehistoric earthwork complex.  Many of the activities from this period at Poverty Point, now under consideration as a World Heritage Site, are based on third-hand here-say.  One of the individuals who worked with Ford I met in a completely chance encounter while visiting a coffee finca in Honduras.  This Central American connection (above photo) is a story in itself.  I regret that the few notes I scribbled in my journal in 1998 were lost during the trip.  Today, I am not even certain of the gentleman’s name. But his memory of the events that had occurred 45 years earlier were remarkably intact.

Based on my past experiences coupled with current projects at the C.H. Nash Museum, The Community Oral History Toolkit is a welcome resource.  The five volumes include:

The Community Oral History Toolkit is a comprehensive introduction to the field.  In any research focus, one could fill bookshelves with volumes on the subject.  However, for those working, volunteering, or studying in the cultural heritage field the Toolkit provides a solid foundation on which to conduct oral history projects.  I particularly like the Toolkit’s staged or sequential approach.  As someone who has written my share of institutional review board proposals for interviews and gone on to conduct that research, I intend to use the Toolkit as the foundation for future projects.  I am confident in so doing, I will be able to assure that the oral history interviews will better address the project goals.  I am also confident that with better planning, the interviews will not end up only in file drawers, but will be used to maximize their role in cultural heritage preservation and presentation.